In this time of pandemic, I spoke to someone (over the phone) who has lived through major disease outbreaks and epidemics in Ireland. We spoke about the diphtheria outbreak in her area in 1943.

In the 10 years from 1936 to 1945, over 30,000 persons in this small country caught diphtheria, and more than 2,600 of them died. Just think of those numbers – not as numbers, but as children. Think of what it means – 60 new cases of diphtheria every week, with an average of five deaths every week.  – Department of Health pamphlet

A recent Irish Times article discussed the “Health Hints for the Home” pamphlets circulated by the Department of Health in 1950s Ireland. The quote above is from its Diphtheria pamphlet. An outbreak of the disease which mainly affected children, had been brought under control by the 1950s. The pamphlet advocated vaccination of children in order to eradicate it. Diphtheria is caused by bacteria that forms in the nose, mouth and throat. It is easily spread by coughing and sneezing. The outbreak in the 1930s and 40s came at a time when war-time rationing was in place. Many houses also had no mains water or flush toilets.

I interviewed a lady, now in her 90s, who remembers living through this dangerous time. She wishes to remain anonymous. She told me that:

“When it really affected the area I lived in I was a teenager. I was born in 1928 so I was about 15 at the time. We had recently moved from a rural area to a suburban area. During the war people weren’t as well off. It was a big change for us coming from the country to a housing estate with only dry toilets down the yard and no running water. The hygiene just wasn’t there. That’s why it spread so much.” 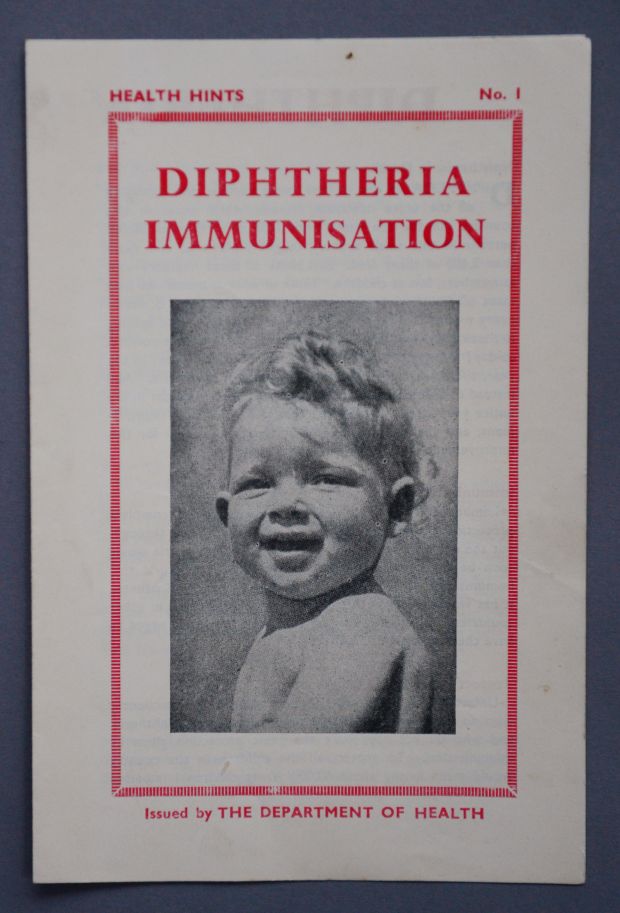 In the village where this lady lived diphtheria affected many children. Most of them were taken away to an isolation unit for five to six weeks. Some unfortunately never made it home and others died before they were even picked up to be taken to hospital. Speaking about how this affected her friends and the other families in the estate she said:

“I don’t remember any adults getting it, but I remember two boys in our area dying from it. One little chap was a cousin of my friend. He died in hospital. The other little fella was the only boy in his family, and he lived near us. Most of the children got better after five to six weeks and were let back home. There were two little girls, I’m not sure what age, maybe 10 or 11. They had to stay in the hospital for 12 weeks because it took them a long time to get over it.”

There was no TV at the time and very few people had radios. People depended on the newspapers for information. If you thought your child had diphtheria you would have to let the doctor know so he could send them to an isolation unit. An ambulance would come to collect the children. Often a few children were collected in the ambulance at the same time. Their parents couldn’t go with them as they would run the risk of spreading it to their other children. She remembers this harrowing time saying:

“A lot of children got it where we lived then, and the ambulance would come and pick them up. I remember another little girl who died in the area. It was only after she died that they realised she’d had diphtheria. She was a lovely little one. It was terrible sad.”

She doesn’t remember the schools being closed and feels that it was left up to families to look after their children and make sure they did the right thing by them. World War 2 was in full swing so, with rationing already in place, people were trying to be self-sufficient. Items like sugar and tea, butter, margarine and jam were rationed as were clothes and shoes. People planted their own vegetables more often back then as even council houses had gardens big enough to allow for this. Speaking about how her own family coped she said:

“My mother always had the house spotless. We’d always wash our hands, especially before we’d eat. She was very careful of us and made us gargle with bread soda and water every night as a disinfectant. She didn’t let us mix much with the other children during the outbreak. There were six of us and none of us got it.” 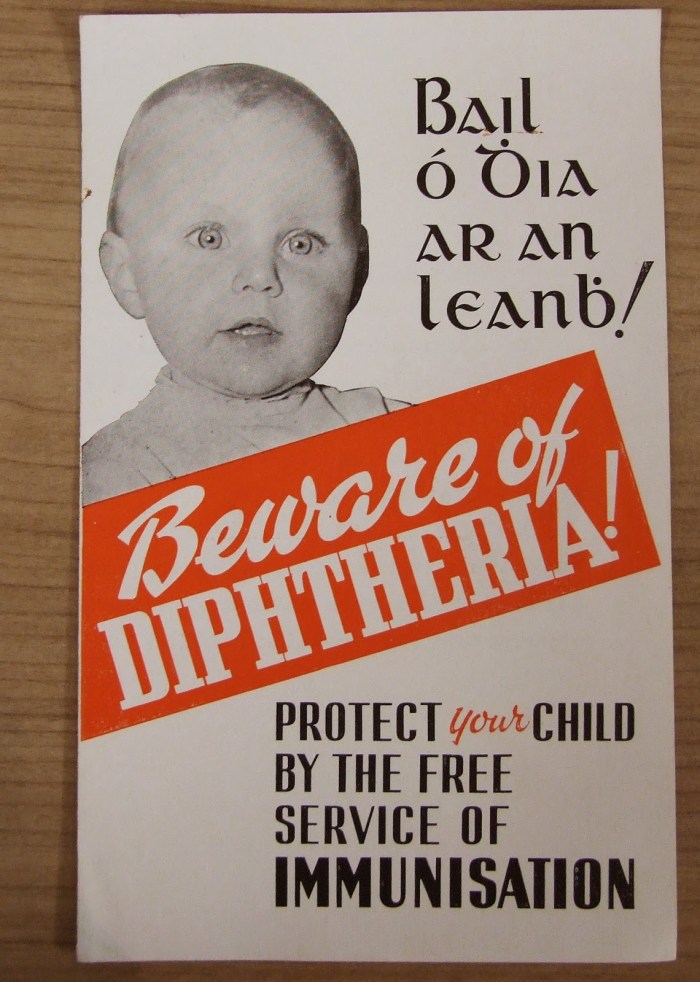 Leaflet promoting a diphtheria immunisation scheme,
collected by Dr McSweeney (CSFH/3/1/4/5) from an article by Fergus Brady on the RCPI Heritage Blog

There was a campaign nationally to encourage people to vaccinate their children. The last big outbreak was in 1948 when 500 people died from it. By the mid-1950s cases had hugely decreased with only 28 cases of the disease in 1952 compared to roughly 60 new cases per week between 1936 and 1945. Her mother was an early advocate for vaccination. She told me:

“Afterwards there was a big focus on vaccination. My mother had already brought my youngest brother to the local dispensary and had him vaccinated. As more people started to vaccinate their children, we saw an end to the outbreaks.”

There have only been two reported cases in Ireland in recent years as the disease had been more or less eradicated since the 1970s.

Having lived through war, numerous recessions, a diphtheria outbreak and the TB epidemic, this lady knows how to handle difficult situations. She has been self-isolating with the help of her children and neighbours since early March due to the Covid-19 pandemic, long before the schools were closed, or the government started to issue warnings. Her advice for people dealing with the pandemic is to stay at home and we will get through this together. She says:

“As much people may be annoyed that they are restricted and can’t move around, they have to abide by the rules. I know it’s hard on them, but it’s the only way we’re going to control it. If people don’t do that, I think there are going to be an awful lot of deaths.

Keep your family together, stay clean and stay healthy.”