Baltray Beach has, since 1974, been home to the shipwreck of the MV Irish Trader. It’s a beautiful strand on the East Coast of Ireland just north of Drogheda in County Louth. The ship has depreciated beyond recognition over the years and no one seems quite sure why it ran aground 46 years ago. Looted soon after it got stuck on Baltray Beach, attempts to get to back out to sea were unsuccessful. Locals will remember it in its early days but now its rusty shell is disintegrating into the sand. There are some interesting stories about the MV Irish Trader here. In September 1999 the beach played host to the Fuck Homelands free party. The gathering saw Tecknononsense and Wreck the Gaff bring their sound systems together to host an alternative to the more commercial dance music festival Homelands that was happening a few kilometres away in Mosney in North County Dublin. I spoke to one of the Wreck the Gaff crew about the motivation behind the event, how the things panned out and the reason they picked Baltray Beach.

“Wreck the Gaff were a lose bunch of djs and friends all into acid techno and punk which wasn’t very prevalent in clubs. We’d been djing and organising parties. I think we’d done one club night in Funnel. Baltray was the only free party we did that year and our first proper outdoor one. We’d been at a few that other people had done earlier that year. Glastonbury festival was a real eye opener for me. Just to see the scale at which things could happen if people just did it.” 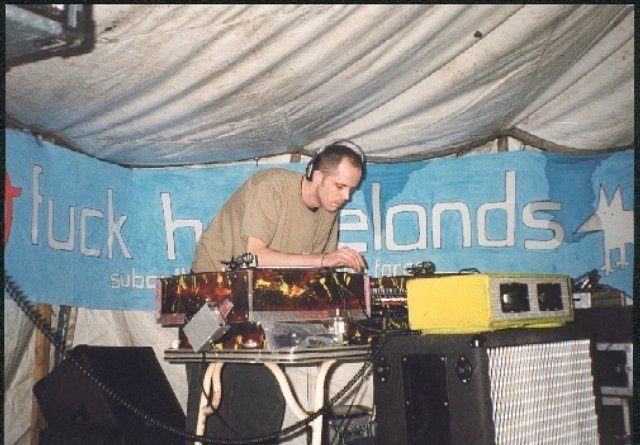 The party was organised to provide a free alternative for people who don’t enjoy the more commercial aspects of music festivals. But also “just to have fun as well”. It was a gathering in the sand dunes by the beach with three sound systems and about 300 people in attendance. It started around 2am and went on until the following afternoon.

Wreck the Gaff from Dublin and Tecknononsense from Waterford both brought sound systems. The Catalyser and Spacekraft collectives were both involved. Baltray Beach was chosen because they wanted somewhere not immediately close to Homelands but in the general vicinity of the festival. Looking for a location far away from people, Wreck the Gaff picked Baltray off a map. It looked around 1km square on the ordnance survey map, but of course someone had to go and assess the site to make sure it would work. Although the wreck of the MV Irish Trader was in better condition then, many people didn’t notice it until the sun started to come up hours after the party began.

“I liked the work of organising a party, making it happen. I didn’t just want to be in a field I wanted to do it. Not just me I wanted us, as in the people who wanted it to happen, to do it. I didn’t just want to go and buy a ticket and stand in a queue and go to Homelands and go “oh look at the djs and look at the lights” and then walk off and go home and not clean up the rubbish or think about it.” 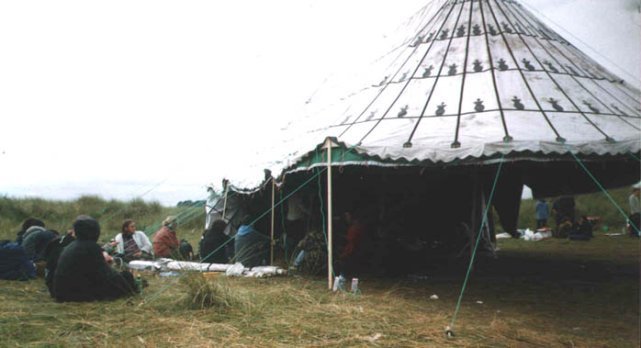 People didn’t have to help out, but they’d come along and wonder why the music hadn’t started. Soon enough they’d be given a job.

“We’d say well hold that and hit that and if we all do stuff it’ll all happen faster. And a lot of people would get straight into that buzz right away. There were always people who would get on that wavelength right away whether they’d come there with that in their mind or not. And then there’s always others that just want to sit in their cars which is fine as well. Cos it is a free party. You can do whatever you want to do. Just don’t be a dick.”

Most of the time if the police turned up at a free party, they’d generally have a look around and then head off.

There was a GeoCities site directing people to the party and the location was only put up at the last possible minute. There were flyers that were vague enough not to give too much away, but interesting enough to get people talking. At one point during the night a white Land Rover with ‘Home’ logos all over it arrived at the party. Someone on the Homelands crew had wandered off to find the rave on the beach and actually managed to get there. 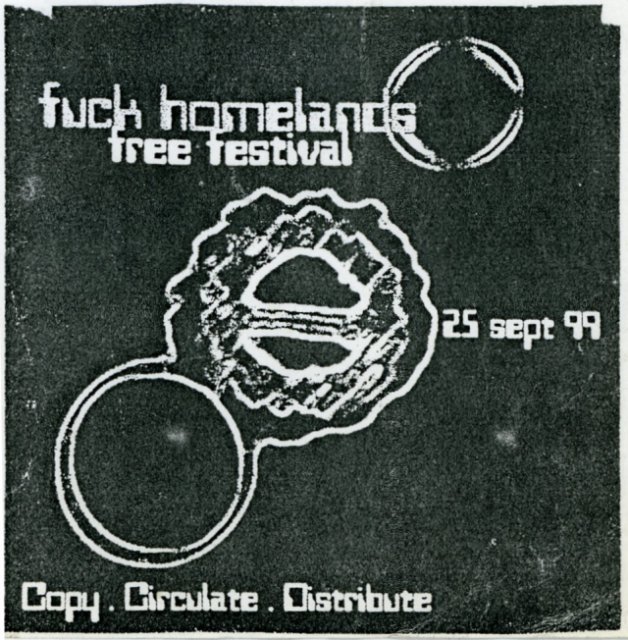 The parties were free in many terms. The most obvious thing for many people is that there was no admission charge. But there was also no specific gate or security – you’d just arrive and you’re there. Free also meant you were free to express yourself or do your own thing. There was a DIY ethos and an underlying political element with lots of cross over with punk scene. In the UK the free party scene grew out of the new age traveller scene which had a lot of earthy punk in its roots.

“It was definitely similar to the punk scene. The term anti-capitalist was a bit of a buzz word at that time. This was not long before the battle of Seattle, one of the biggest world profile anti-capitalist demonstrations. The Glen of the Downs was also going on between 97 and 2000 and lots of us were involved with that. There was a lot of cross over with the anti-roads movement.” Wreck the Gaff were greatly enthused by the success of Fuck Homelands and made a greater effort to build up their sound system and capacity. By the following summer they were better set up with more equipment, more energy and enthusiasm, and more contacts. They were involved in many more free parties over the next three or four years. DRATpak from Dundalk became their most frequent collaborators. The parties were rarely in Dublin but rather Dundalk, Drogheda, Waterford, Tipperary, Wexford, and even an island in the middle of Lough Dearg. In June 2000 Wreck the Gaff first met Force 10 Crew at a party at Magik Hill in Dundalk. In 2001 they did their first party on Rathlin Island with them and these continued almost yearly until 2013. They played a significant role in Ireland’s Reclaim the Streets protests in the early 2000s.

At the beginning sound systems were pointedly put together on the cheap. The first speaker they acquired was £10 and the second was picked up for free. After a while they started to spend more money on speakers and gear and put more focus on the sound. The name Audioterrorists was coined specifically for the big anti-war demo in 2003 when Wreck the Gaff strapped speakers to trolleys and brought music to the biggest demonstration ever seen in Ireland at that point. He jokes that Audioterrorists was the political wing of Wreck the Gaff. The new name soon took over.

All of the Wreck the Gaff/Audioterrorists crew are still friends. People have grown up and had kids. Some work as teachers, web designers, event crew, social workers and lecturers and one is still working with djs and promoters to provide sound systems and dj equipment. They feel that the spirit is still in what they all do. 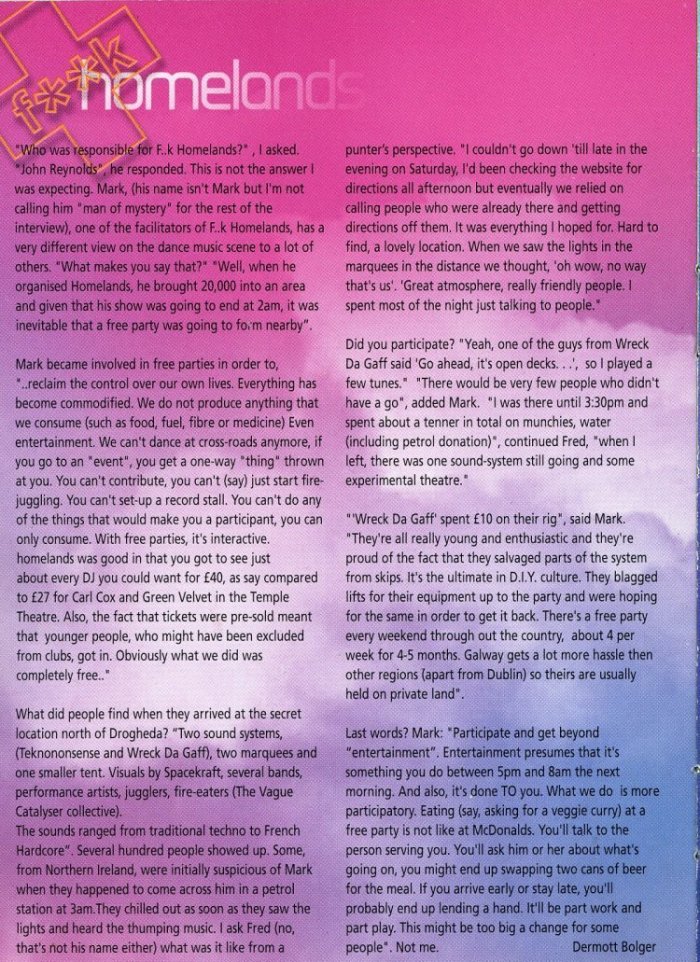