The Doagh Famine Village was the source of a particularly hilarious episode of Joe Duffy’s Liveline on RTE recently. Liveline is a phone-in radio chatshow hosted by veteran Irish TV and radio host Joe Duffy. The show, which involved Joe being told to; “wind his neck in” and being called “a big fat shite”, a woman threatening to choke Ronan Collins, Eamon Holmes’ dinner, Soviet submarines, and Tina Turner and the Chieftains singing The Sash, all started with Joe discussing a Twitter thread by Dr. Emily Mark Fitzgerald. The Famine Village is a wonderful celebration of Irish life and culture. 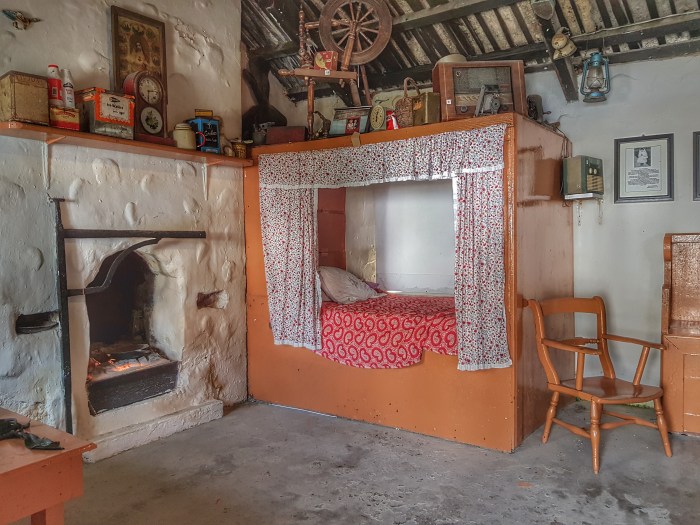 The associate professor had visited the museum on Doagh Isle on the Inishowen peninsula in north Donegal. Her Twitter thread begins, “I have been to some ropey museums in my day – but this one takes the biscuit. Where do I even begin…” and goes on to criticise aspects of the curation. It actually generated quite a bit of praise for the Famine Village and, while she does call the museum “historically illiterate” she also says she thoroughly enjoyed it and recommends it to others in the thread. I was going to Donegal a few days later so decided to pay it a visit.

Doagh Famine Village is curated and run by Pat Doherty and his family. It’s got a wonderful ethos and is a fabulous and very worthwhile experience. I would highly recommend it to anyone. A tour costs €10 and has two parts to it. The experience starts with a guided tour of the cottages where Pat and his family lived until 1984 without running water or electricity. Pat tells visitors how they lived, fished and carried water and explains some of the local customs. Next, you’re brought to another cottage which has been set up to show how poitín (a strong alcoholic spirit) was made, with a sample provided for everyone. And then its on to the Wake House where a discussion on death and the rituals and customs associated with it takes place. The origins of phrases such as “dead-ringer” and “snuffed it” are explained. 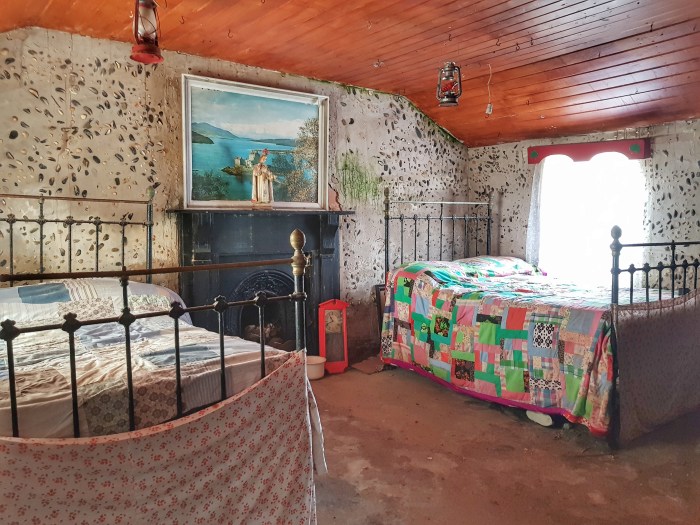 Pat then explains that the rest of the tour is self-guided and takes in various aspects of Irish history including the Famine and the Troubles in the north of Ireland. He says that although we’re in peace times now, being so close to the border, he has tried to depict both communities’ narratives. He began adding this part of the museum in 1997. It includes a substantial section on the famine, a mass rock, a Presbyterian meeting house and a fully kitted-out Orange Hall. It also has an IRA safe house with seven rooms that you have to navigate your way out of. In the safe house you’ll meet some of the hunger strikers, Mo Mowlam, John Hume, John Major, Albert Reynolds, Bertie Ahern, Ian Paisley, Gerry Adams, Martin McGuinness and the Queen … in the safe house. There’s no doubt it’s quirky, but it’s also brilliant. 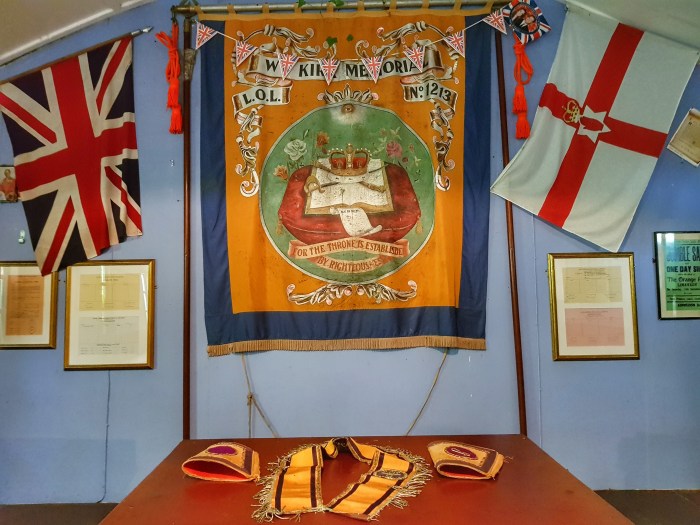 The exhibit on Traveller culture and history is given as much space as any of the other important aspects of Irish society. Traveller history is not taught in schools and colleges in this country. We don’t often hear about Traveller culture on TV or radio, in museums and art galleries despite the fact that Travellers are Ireland’s only indigenous ethnic minority. What we do hear is predominantly negative. The Famine Village exhibit is factually accurate, and the information came directly from Traveller organisations and from Travellers themselves such as Chrissie Ward and the Irish Traveller Movement. This part of the museum honours people in our society who don’t often have a voice and who are often portrayed negatively in history books and in the media, if they’re even included at all. 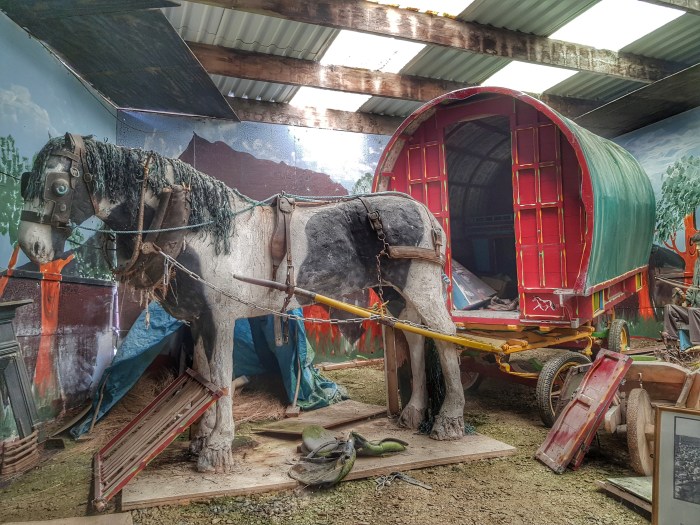 The madness on the Joe Duffy Liveline show can partially be attributed to the inclusion of an opinion piece written by Republican ex-prisoner Eddie Gallagher in one of the exhibits. Eddie Gallagher took part in the kidnapping of Dutch businessman Tiede Herrema in 1975. His partner Rose Dugdale had been imprisoned in Limerick Prison for hijacking a helicopter and bombing an RUC base. She was pregnant with their child, and he wanted to negotiate her release. The hostage situation went on for 36 days and ended after an 18-day siege of the house in Monasterevin where Herrema had been held. He forgave his kidnappers saying, “They could have been my own children. They must have been through desperate times to have come to this”. Gallagher was sentenced to 20 years in jail and married Dugdale in Limerick Prison in 1978, making them the first inmates ever to be married in prison in Ireland. Joe Duffy took exception to the inclusion of the piece written by Gallagher that claimed, “NATO and the USA bear a heavy responsibility for 35 years of suffering in the north of Ireland”. How this took us to Tina Turner, Eamon Holmes’ dinner and choking the life out of Ronan Collins is less clear … 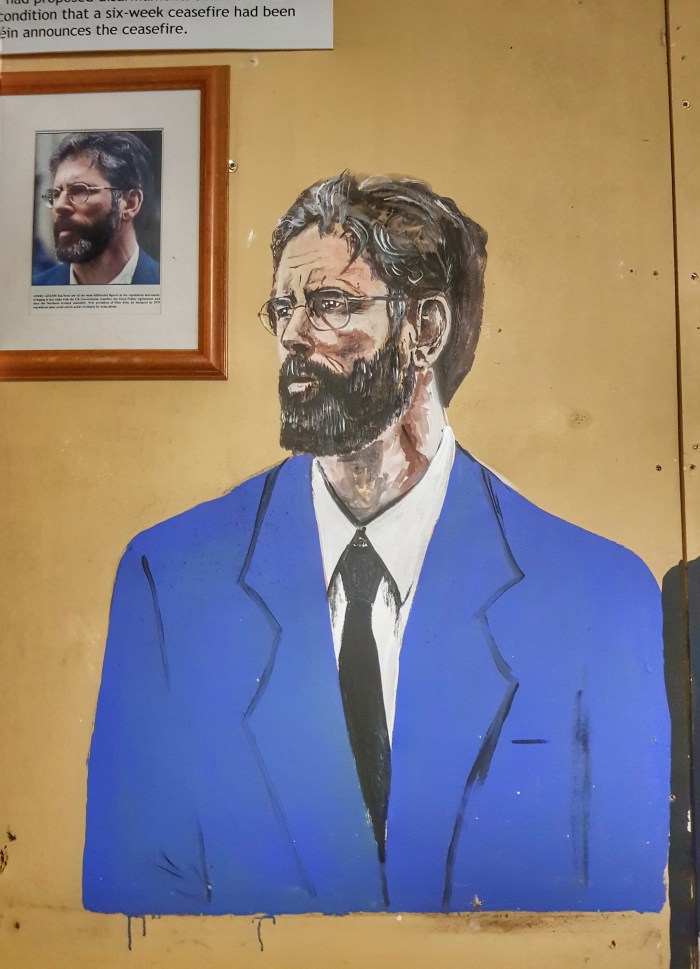 Gerry Adams in the safe house

There is no doubt that Doagh Famine Village is an outsider museum because its run independently and without funding. Just like in any sector, funding stipulations can often declaw a narrative or muzzle creativity. It can sanitise and standardise work that was first motivated by passion and a desire to document undocumented history and tell untold stories. This museum is free from all of that and is an expression of the drive and passion shared by the people who have created it. Pat’s family are highly educated people and are by no means “historically illiterate”.  This is a museum that does not attempt to rehash the work of the big state museums on a minimal budget. It does its own thing. Like Watts Towers in Los Angelis, La Maison de la Vaiselle Cassée in France, Froggyland in Croatia and the Hurdy Gurdy Radio Museum in Dublin, this museum is an ongoing labour of love infused with creativity and quirks that make it a more memorable experience than most. The work put into it is phenomenal and I genuinely learned quite a bit. The ethos is one of diversity, respect and dignity. It’s a celebration of Irish life and culture. There are Martin Luther King quotes on the walls and anti-authoritarian slogans such as, “When money talks, the truth keeps silent”on the mugs in the modest gift-shop . There’s a good vibe about the place and it is well worth spending a few hours there. 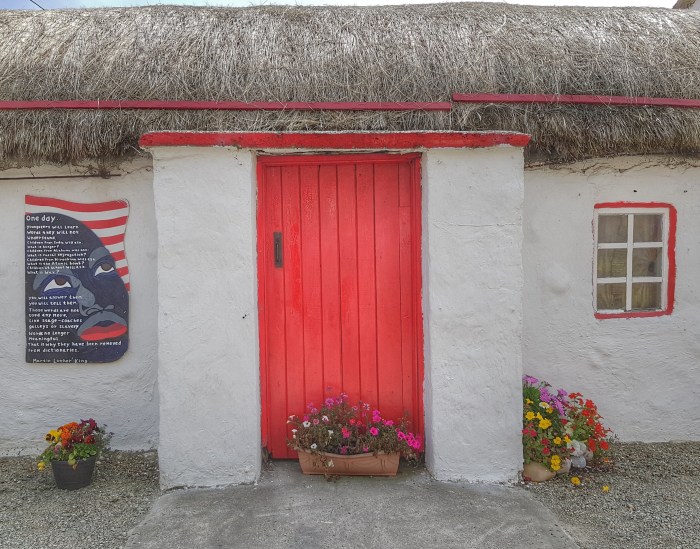 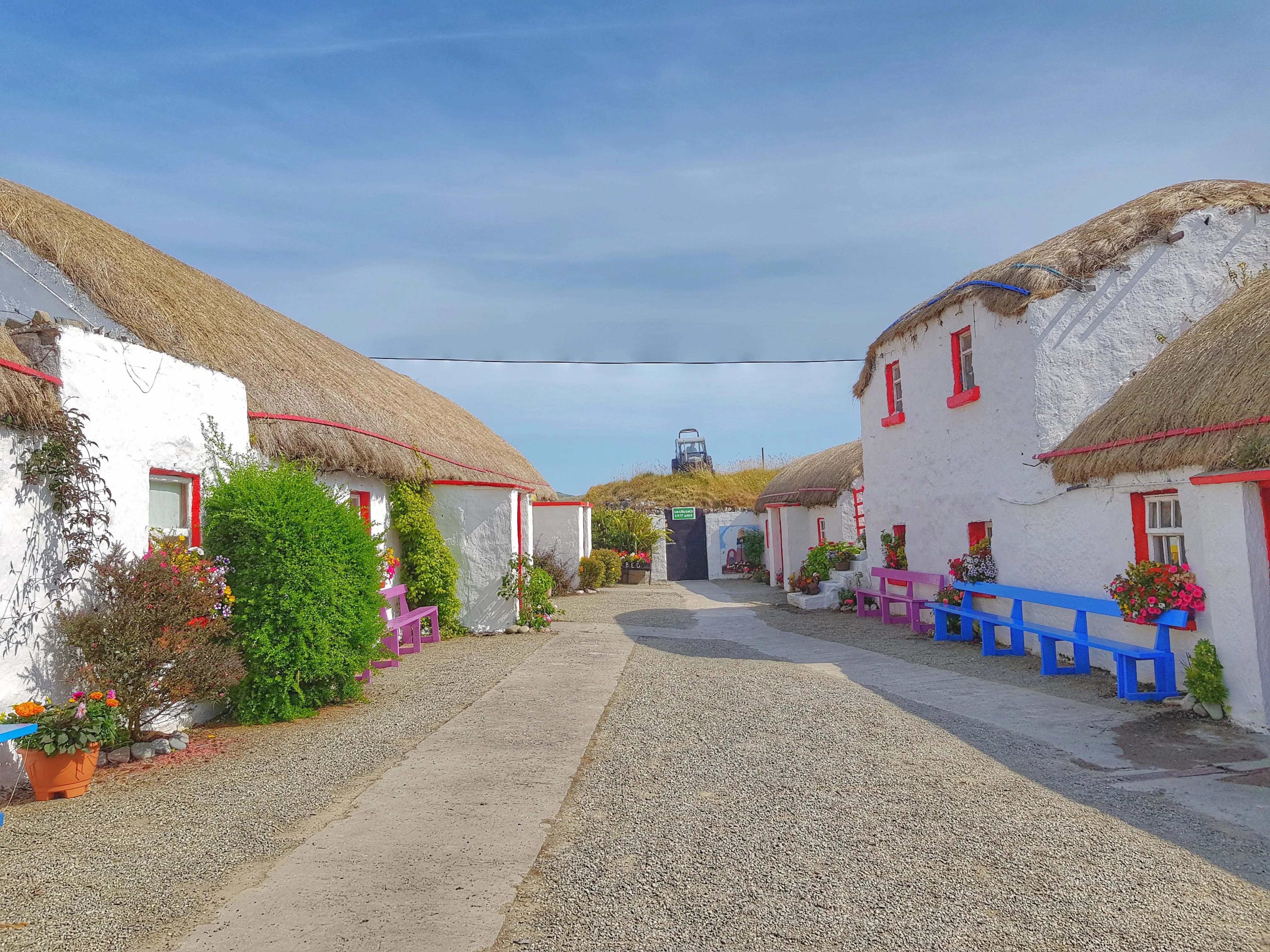 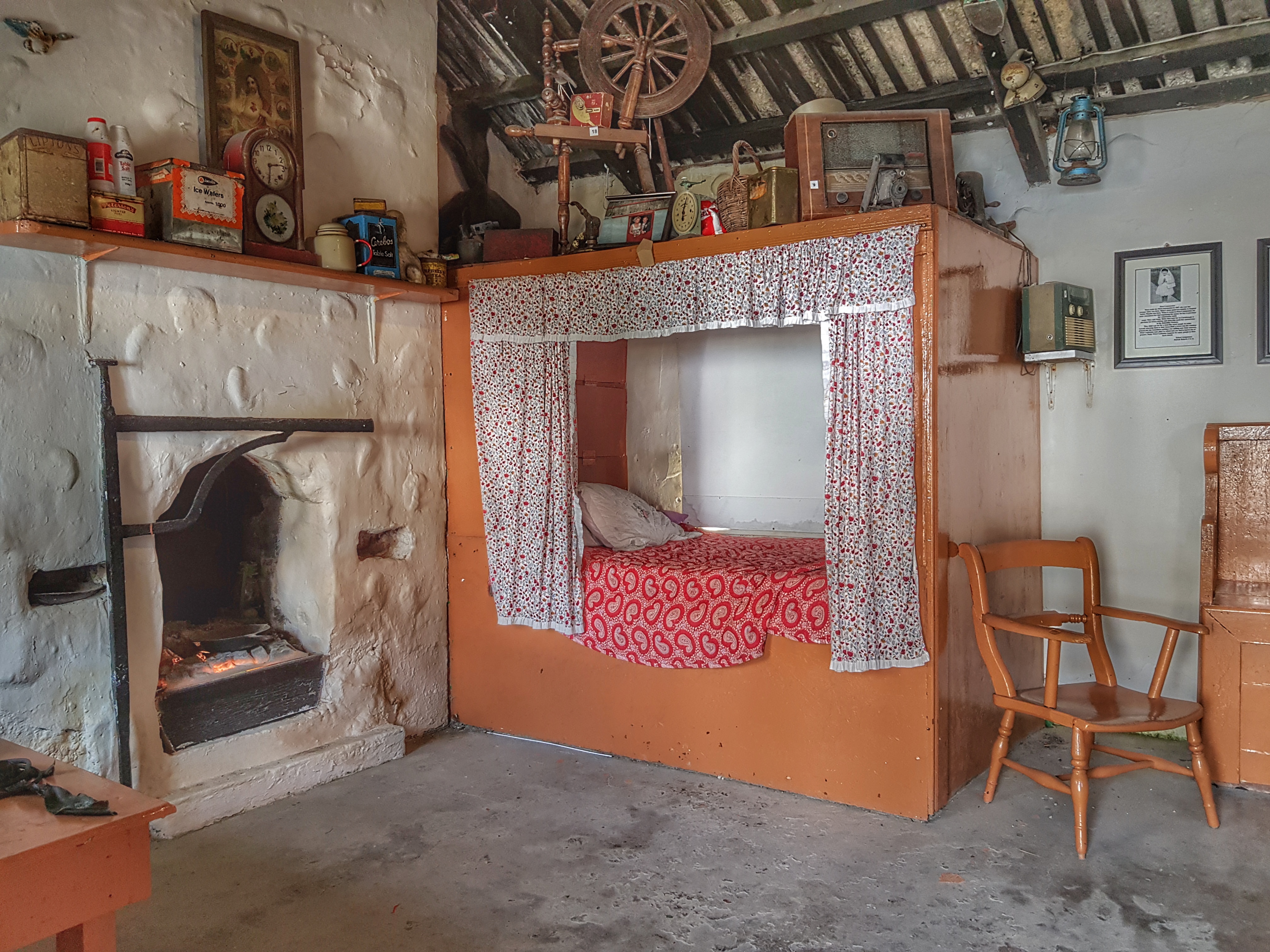 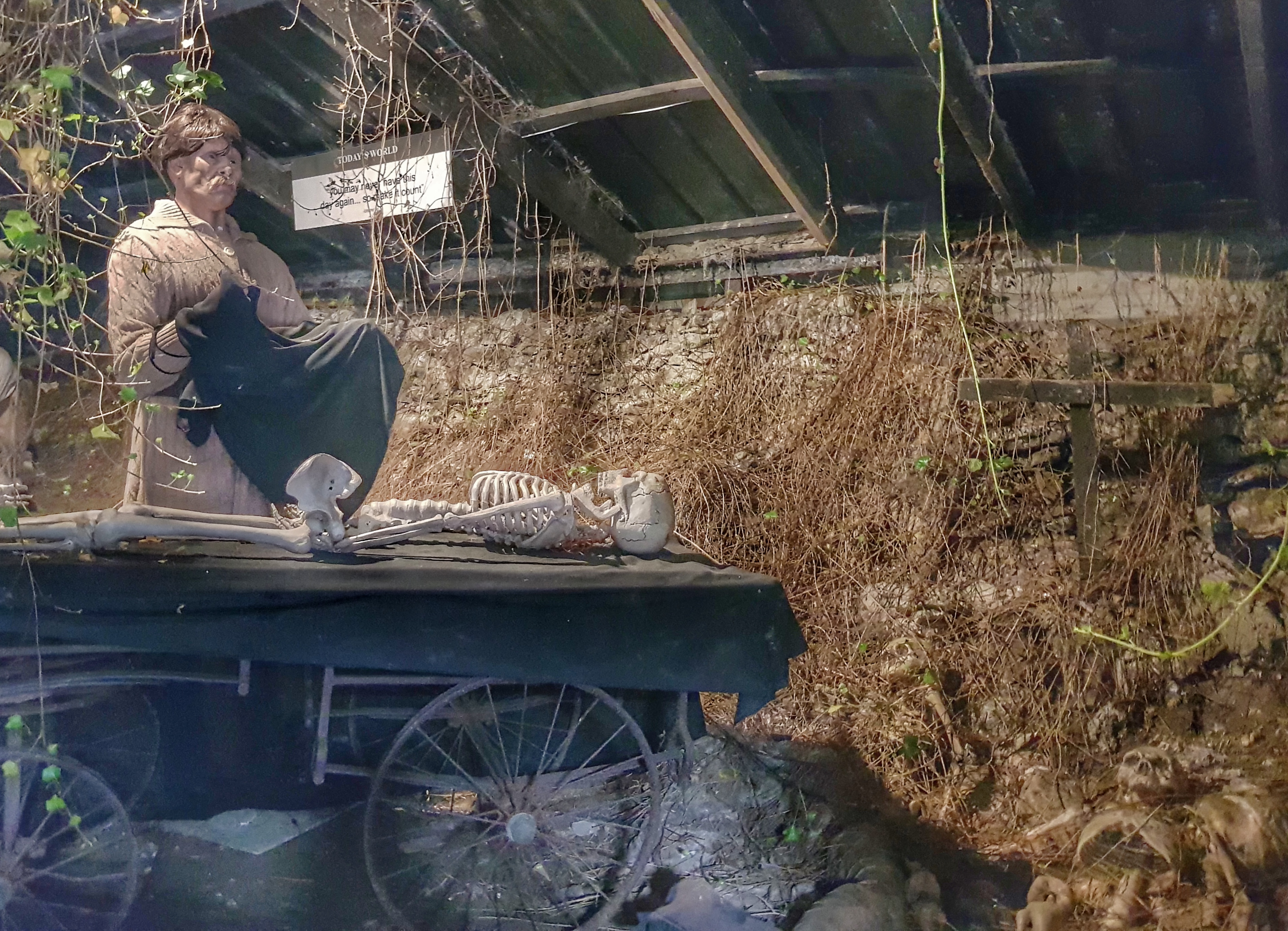 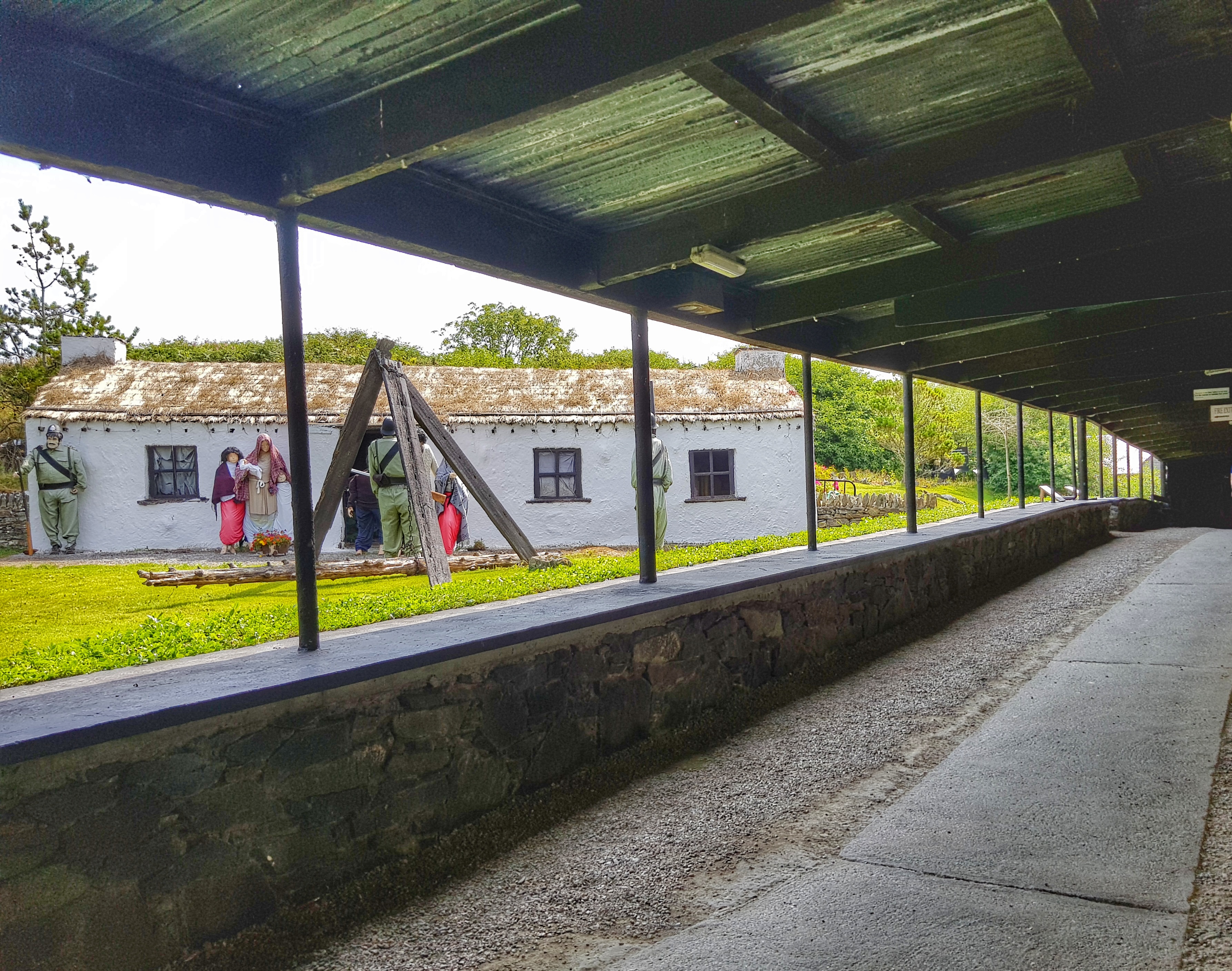 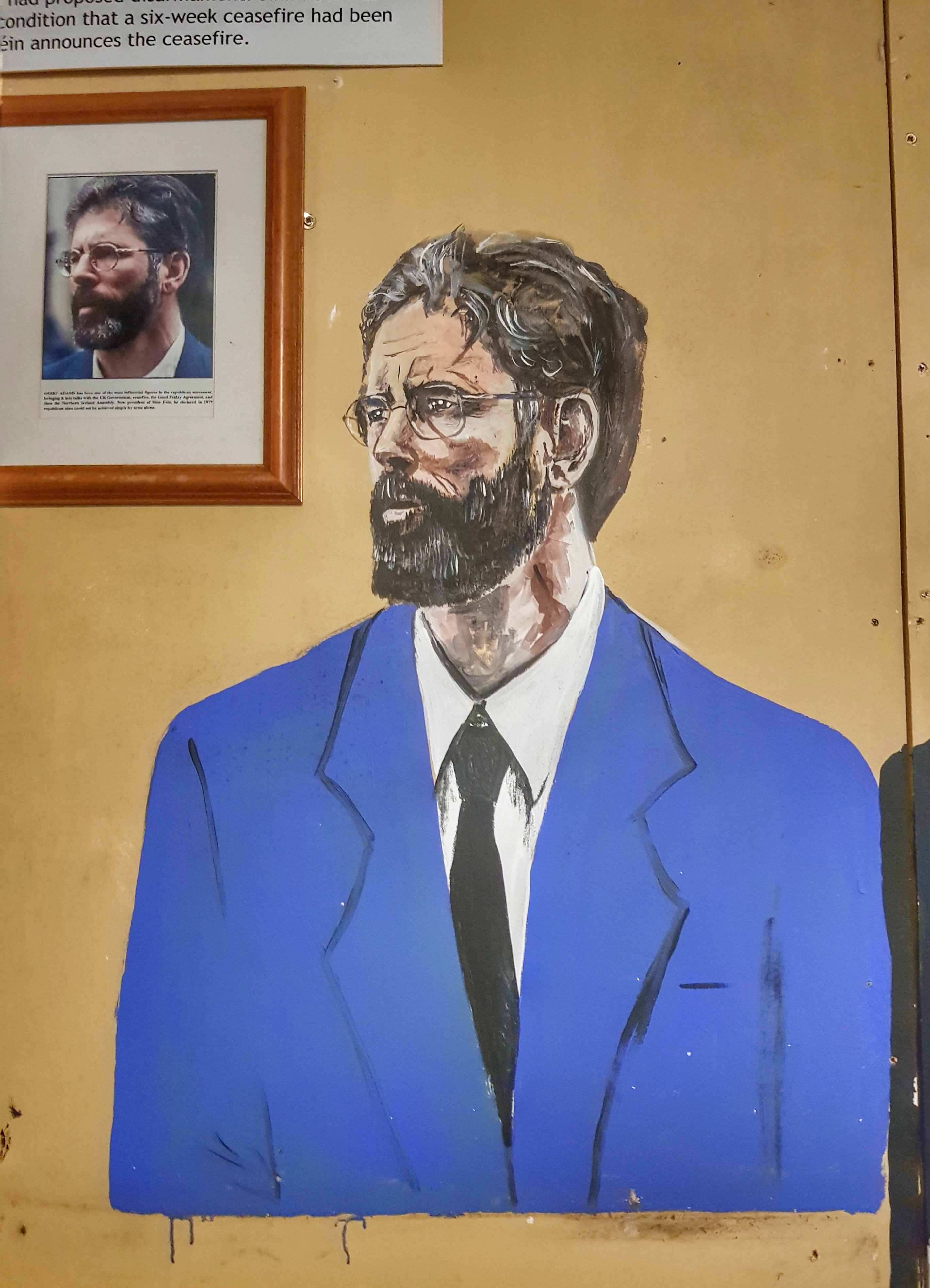 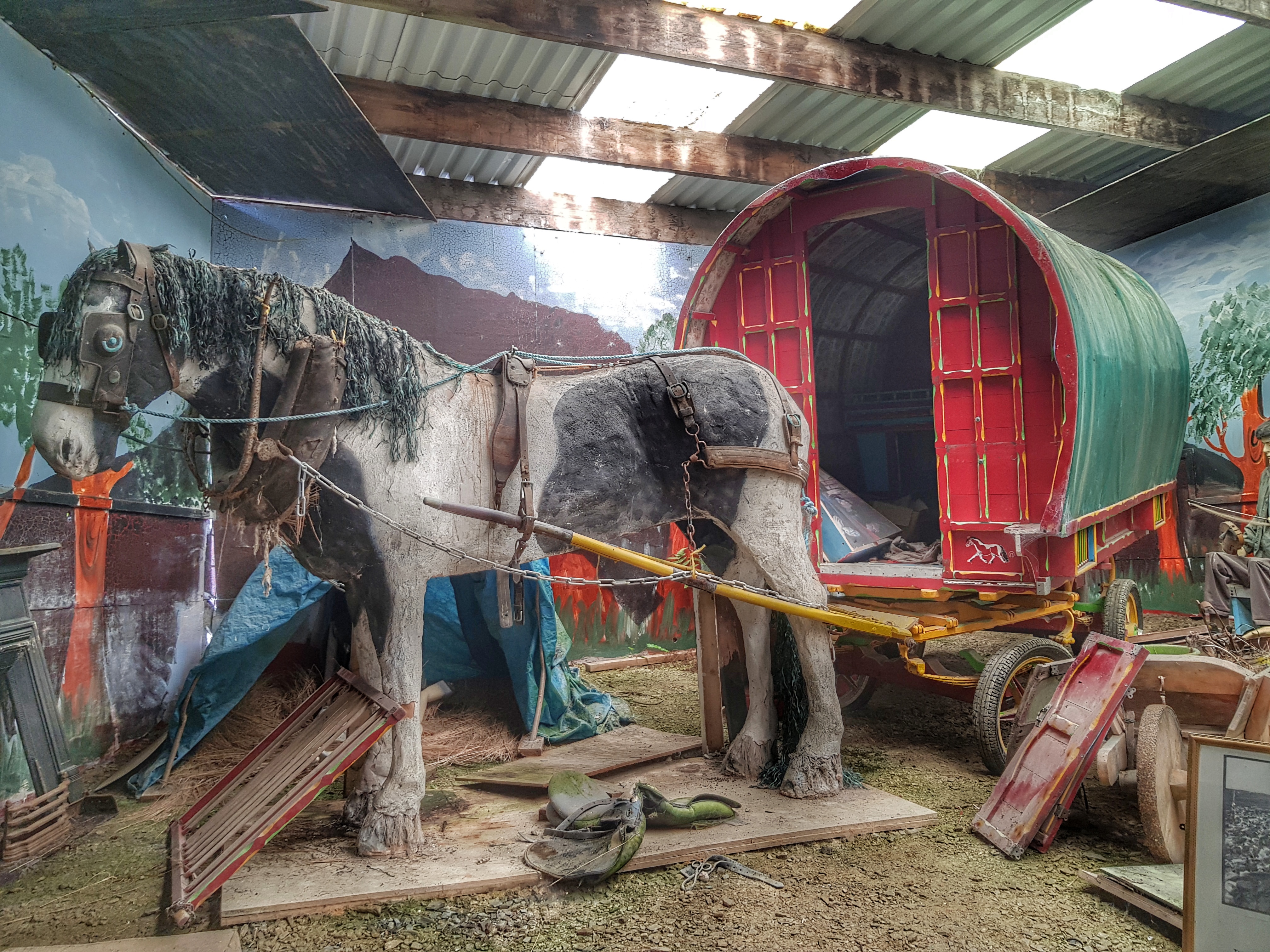 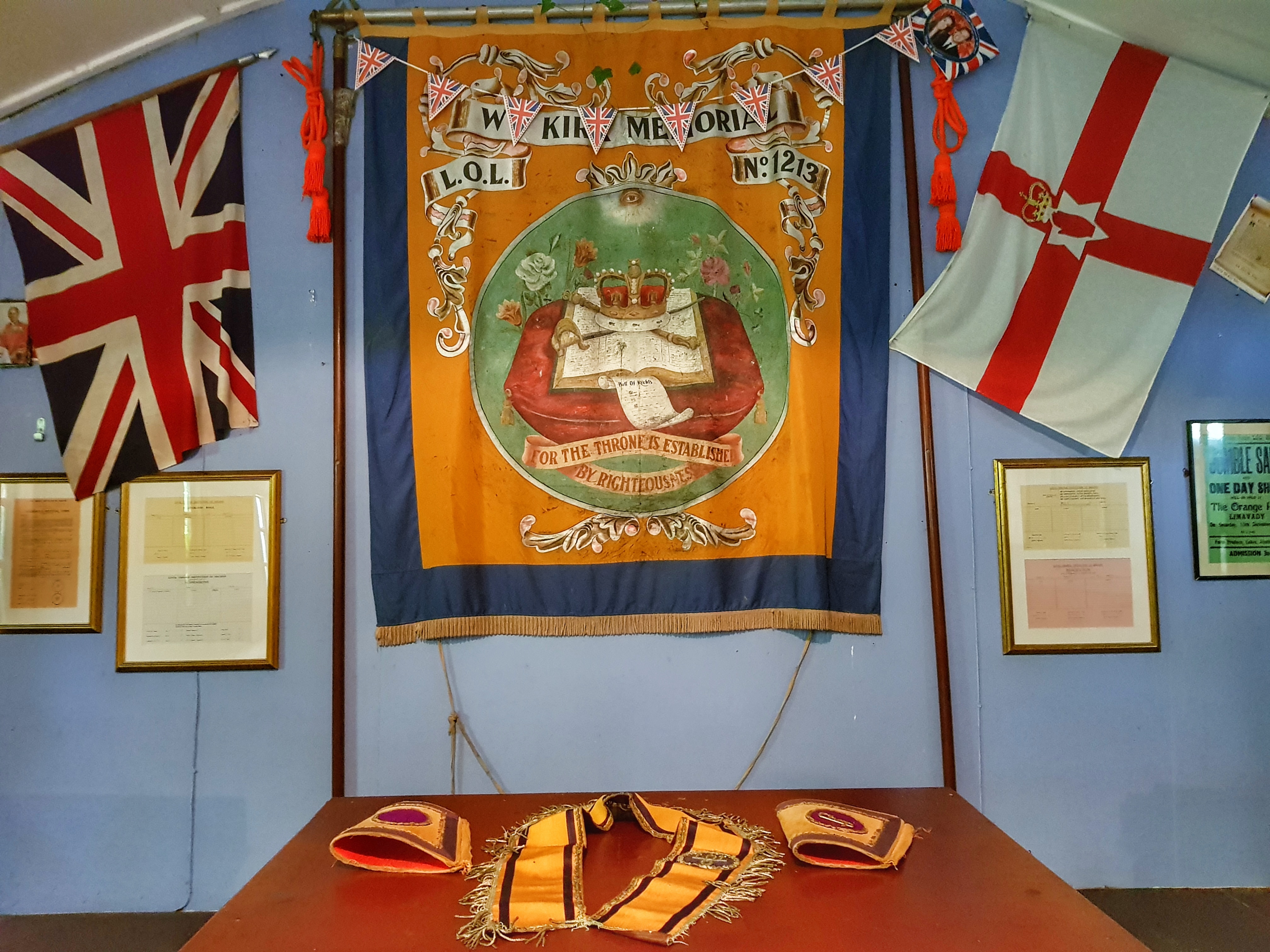 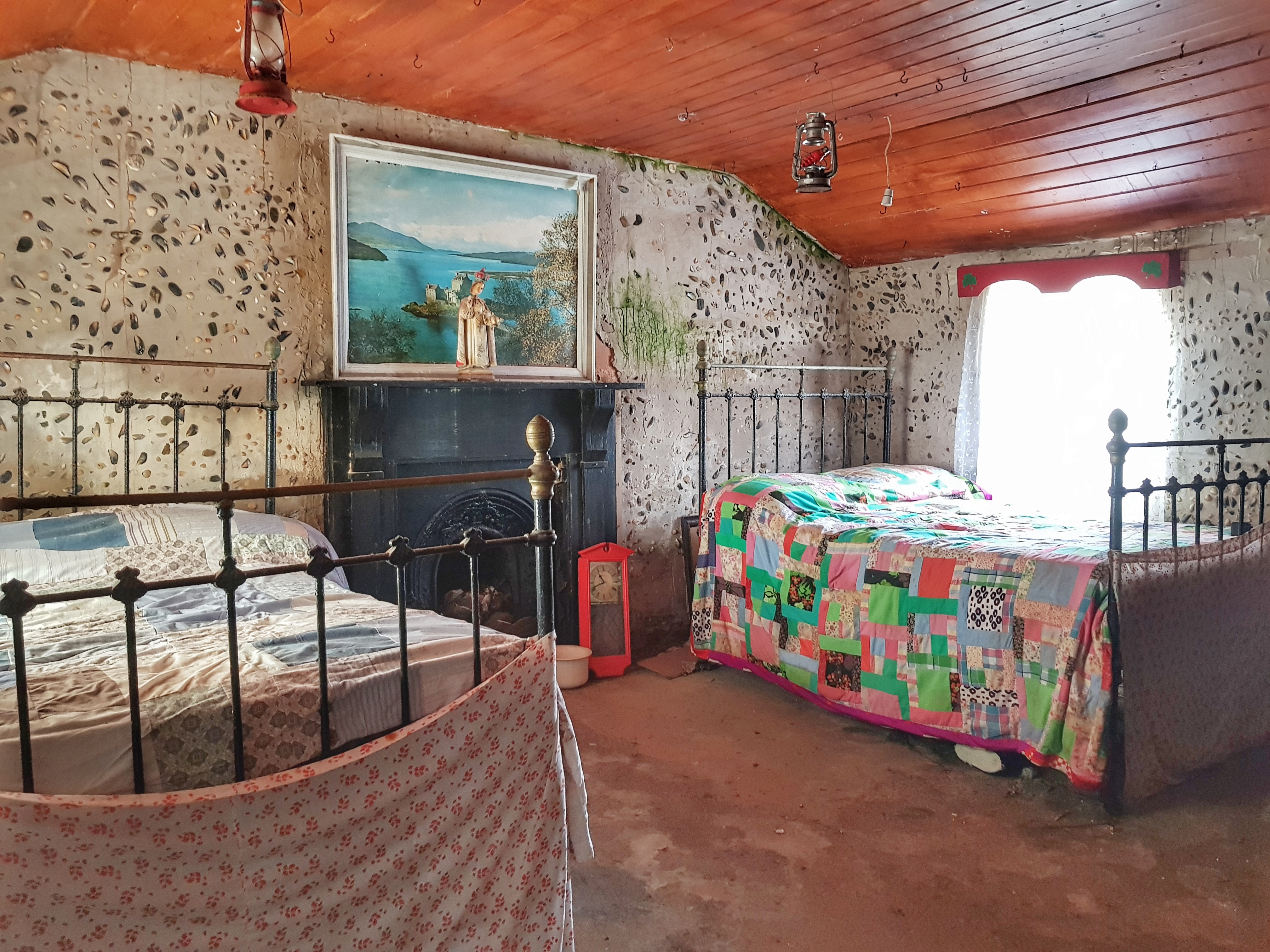 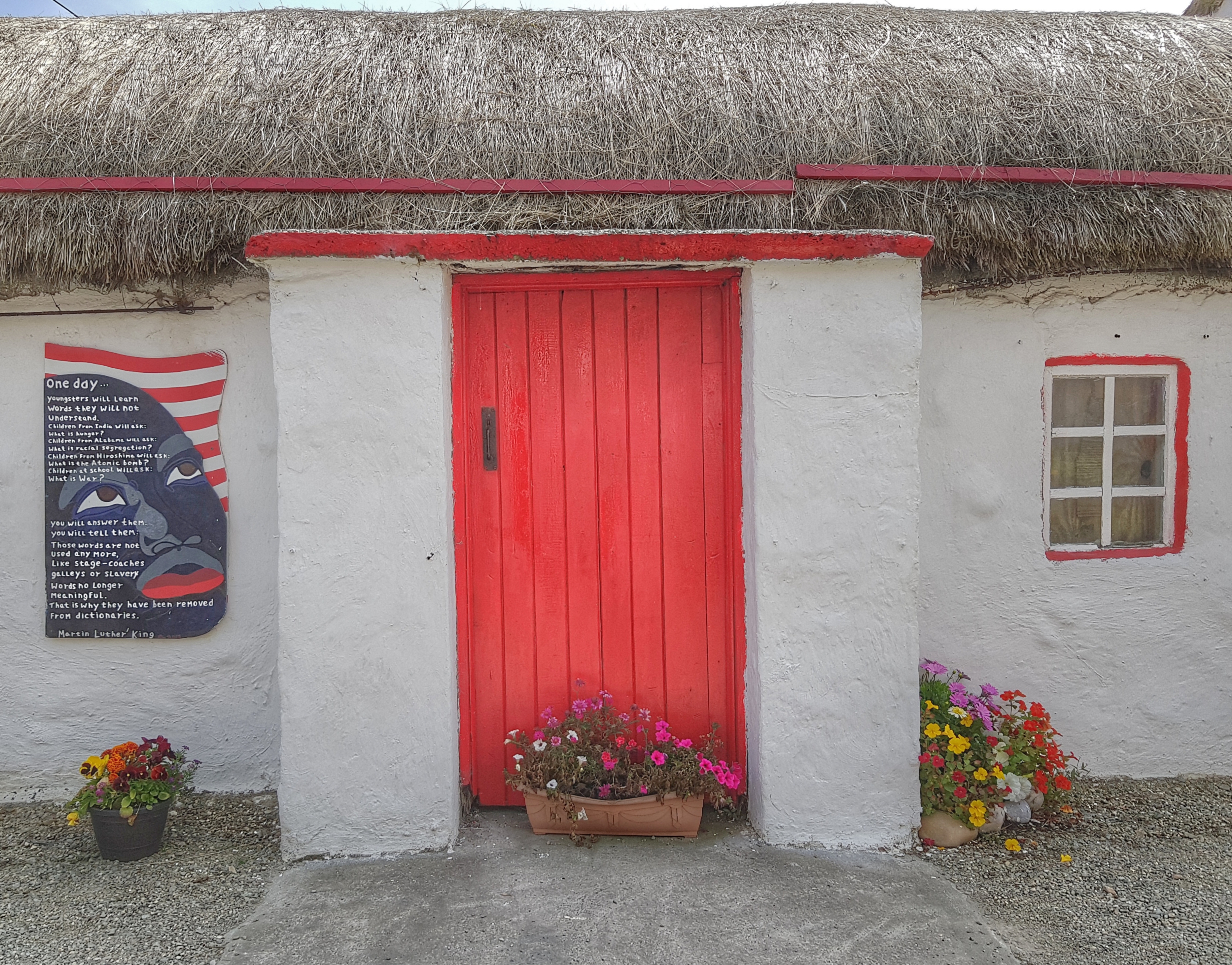