On 28 September 2013 we cohosted a fundraiser to recoup funds after the last Jigs & Rigs festival on Rathlin Island. The festival, organized by Force Ten Crew and the Audioterrorists, was a three-day rave on a tiny island off the north coast of Ireland that brought between 500 and 2000 people to the island, that is home to just 80 people, once a year. Both groups had been organizing free parties and gigs since the late 1990s and had a DIY leave-no-trace ethos. With some members of the Force 10 Crew resident on the island the festival began in 2000. They joined forces with Audioterrorists in 2001 and later Electrotoxic and Homespun from Belfast got involved. Pobail Beag also came onboard in later years.  Over the years the festival took various forms and music varied from acid techno to gabber, lots of breakcore and ravey stuff, electro, techno and some live music. 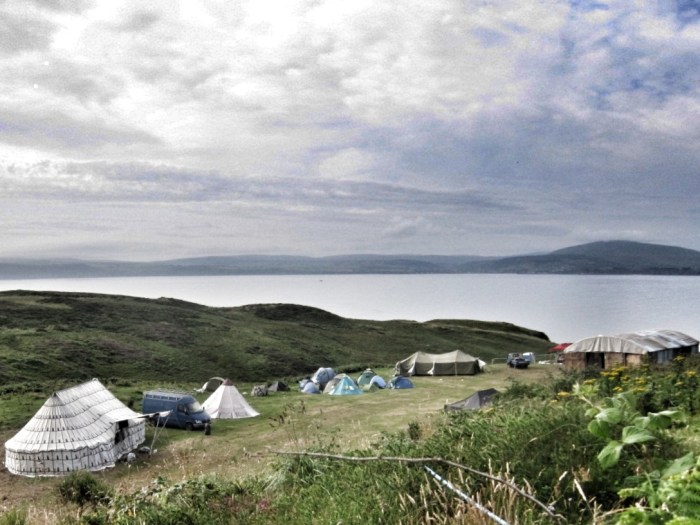 Getting to Jigs & Rigs involved travelling by bus, train or car to the Northern Irish town of Ballycastle where you could catch a ferry to the island minus your vehicle. Ferrys were not frequent so a bit of pre-planning was advised, and locals often carried people across in their own boats. It was also necessary to bring everything you might need to sustain you for 3 to 4 days at a festival on a windswept island as there were no commercial venders on the site and limited supplies in the village on the island. After a 40-minute ferry ride locals and festival crew picked up festivalgoers in cars, mini-buses and pick-up trucks driving them to the festival site, remote enough not to disturb the neighbours. Paddy Bloomer’s barn and the Audioterrorist and Force 10 sound systems were regular features with Pobail Beag present for the last few festivals. The festival ethos respected the natural environment and had no commercial ties. The sound systems and production were top notch. Line-ups saw new artists, producers and DJs perform with well-established and international acts, but mainly featured the best of home-grown underground talent.

The festival has been on hiatus for a number of years, but it was never a commercial venture so we would not be surprised if it emerged again. We had been involved in a pre-Jigs & Rigs fundraiser with the Audioterrorists in 2011 so we were delighted to collaborate with them again after the last festival to host an amazing night in the autonomous social centre Seomra Spraoi in Dublin. Acts who had played at the festival along with attendees came together after the event to raise money so that none of the organisers got saddled with debt which they covered themselves as it was not a commercial festival. The festival still had a free party ethos and only charged a nominal fee that went towards covering costs. The post-Rathlin fundraiser gig was a great opportunity for festivalgoers to get together again and it finally winded down around 7am. The lineup that night was insanely varied, full of surprises and pretty damn epic.

Now renowned artist and producer Eomac, who is also one half of Lakker, played flawless techno. Bill Blackmore; techno with a trumpet

Canadian MC Alex Silas dropped in on his travels through Europe and hopped on the mic with Dr. Ed who went on to play a stomping afrobeat set. Dr. Ed aka edzillion had been working with the Dublin Afrobeat Ensemble for a number of years and regularly performed with Alphabet Set and Gramophone Disco.

Zyme from Gamepak mixed things up with a ragga jungle set with a glitchy twist. Simonok performing as Jure Novak on the night dropped in on his way back to the States to drop some Balkan Beats.

Alien Hand opened a hardcore set with a Crass track. Who knows, maybe someday we’ll find the lost audio files from the night, but in the meantime check out some of the artists at the links above.