Ireland is not renowned for its brutalist buildings, but it has a few gems. One good place to take a walk through some of our iconic brutalist and modernist structures is the University College Dublin (UCD) campus in Belfield just south of Dublin city centre. UCD is one of Europe’s leading research universities and is ranked in the top 1% worldwide. Initially opened as the Catholic University of Ireland in 1854 it was later renamed University College in 1882. By 1911 the university had started to expand onto land donated by Lord Iveagh at Earlsfort Terrace, Hatch Street and St Stephen’s Green. Dublin’s Iveagh Gardens were also part of this donation. UCD was located at these city centre locations until the 1960s when the move to the Belfield site began. Starting with the faculty of science, a thoroughly modern campus began to emerge. The transition period was mired with student protests that ultimately led to greater student representation and the establishment of Ireland’s first students’ union. Its 133-hectare site now caters for over 30,000 students each year.

An international competition was held in 1964 to determine who would be tasked with the job of designing a purpose-built campus on this new suburban site. There were 105 entrants from 46 different countries. The winner was a young Polish architect called Andrzej Wejchert who had trained at the Warsaw Polytechnic in post-war communist Poland. He had been working in the design office of the municipal buildings department in Warsaw, a city renowned for its brutalism and socialist-realism, and was about to leave for Paris to visit his girlfriend and fellow architect Danuta Kornaus when he received the news that he had won the award and should make his way to Dublin to take up his new post. He abandoned his trip to Paris and spent all his money on a one-way air ticket to Dublin. He had to leave one suitcase full of clothes behind as he could not afford the excess baggage charges. He arrived in Dublin with just his architectural books and plans and a small amount of clothes.

Wejchert’s masterplan for UCD had originally taken shape on his mother’s kitchen table before he had ever seen the Belfield site. UCD authorities were somewhat taken aback by his youth and inexperience and asked him to undertake the project with established Irish firm Robinson, Keefe & Devane. He worked closely with Andy Devane and started to find his feet in Ireland. 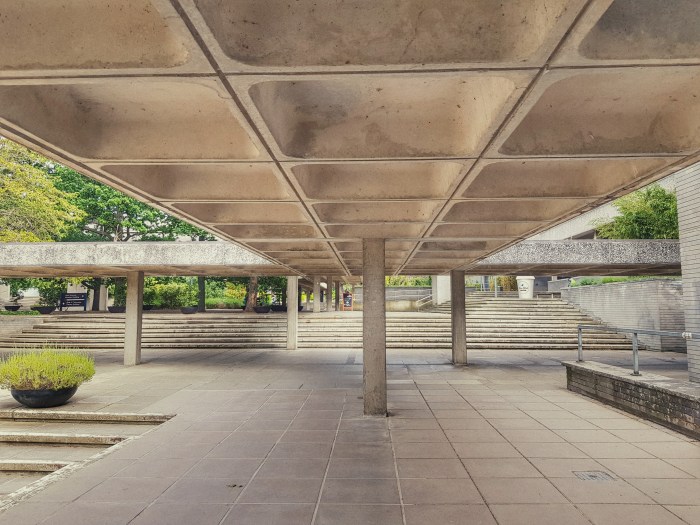 His design was a linear plan which placed the primary faculties outwards from a covered walkway or spine, surrounded by an inner-ring road to keep pedestrians and cars apart. His original plan included multiple gardens as well as a canopied walkway off which all the faculty buildings would be situated at intervals. Not every aspect of his plan came to fruition but many of its elements are still evident despite some obvious deviations from the plan over the years. The Tierney administrative building and the Newman Arts block were both designed by Wejchert and still stand today as impressive specimens of Irish brutalism. Dr Ellen Rowley describes the Newman Building as, “an architecture of systems, from anodised bronze glazing to striped horizonal concrete panels which hold ducts containing heating pipes, electrical trunking, slots for fresh air intake and the safety track for window cleaning.” It was completed in 1969 and co-designed with Randal McDonnell. It is connected by a concrete and Perspex walkway to the similarly impressive Tierney Building which was awarded the RIAI Gold Medal in 1971-73, Wejchert also designed the two iconic water features on the campus; the formal lake which, besides its aesthetic purpose, functions as a fire hydrant in case of emergency and the 60-metre, reinforced-concrete duodecahedral water tower with its pentagonal stem which holds up to 150,000 gallons. The water tower is perhaps UCD’s most iconic structure, often depicted in art, advertising and popular culture.

Other notable buildings that run along the central spine featured in Wejchert’s masterplan are the Agriculture and Science Building and the James Joyce Library. The Ag/Science building was designed by Patrick Rooney and opened in September 1979. It was the first Irish building ever designed with computer-based design tools. It won the Irish Concrete Society Award in 1980 and has capacity to house 30 cattle in its basement. The James Joyce Library on campus also complements Wejchert’s masterplan very well. It was designed by John Hardie Glover of modernist Scottish firm Spence Glover Ferguson and constructed in two phases the first of which was completed in 1973 and the second in 1987. Its precast and in-situ concrete structure, modular nature and the various additions over the years have resulted in a vast brutalist structure that is relatively low-lying compared to its neighbours on the campus. 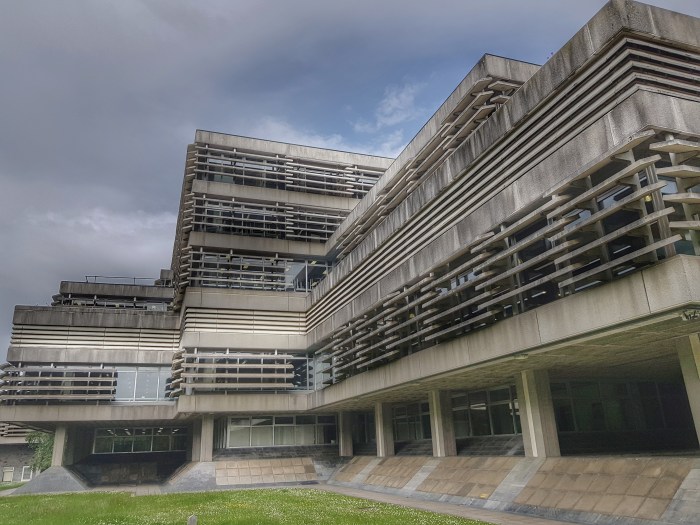 Wejchert’s covered walkways are a beauty to behold. They form a link from science buildings all the way to the Restaurant Building (now called the Gerard Manley Hopkins Building) at the other end of the campus core. Made from waffle slab and white quartzite, they lead to courtyards and meeting places between buildings supplemented by planters and outdoor seating made predominantly from concrete and quartzite. While the plan to include a garden for each faculty may not have come to fruition, the maple and beech trees and abundant lavender planted along the walkway create a lovely ambience. The Restaurant or Gerard Manley Hopkins Building is seen simultaneously as one of Belfield’s most modernist and brutalist structures. It was designed by Robin Walker and opened to students in 1970. Despite winning the RIAI Gold medal in 1969 – 71, many people think it is ugly due to its exposed grey concrete and ‘oppressive’ shape, but personally, I love it. It was originally designed with a completely open floor plan over two floors to allow for gatherings and interaction between the faculties. It is a highly functional building despite the interior being much more boxed off now, even the covered forecourt outside is perfectly equipped as a meeting place for students. In 1977 it was home to Ireland’s first punk festival headlined by the Undertones and the Radiators from Space. Unfortunately, a brawl broke out at the gig and a young man lost his life. 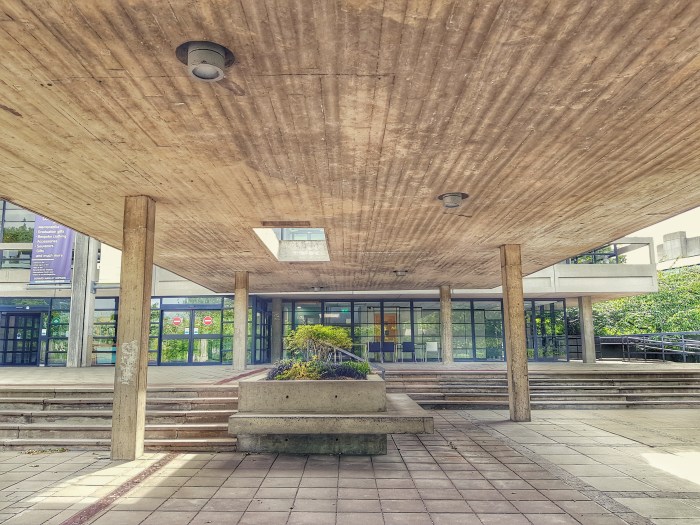 In 1981 Wejchert designed the campus sports centre with indoor training facilities and changing rooms. It can be found separate from the central walkway and closer to the water tower than any of the other buildings mentioned in this article. It was highly commended by the RIAI gold medal jury for 1981–3. Wejchert was never entirely satisfied with the execution of his masterplan. He envisioned a logical spine-like pathway through the campus with all the faculties set directly off this on their own landscaped grounds. In an interview in 2008 he said that “none of that remains”, and that the place feels disconnected and would have benefitted from greater emphasis on continuity and integration as it developed and grew over the years.

He did, however, make Ireland his home and lived here until his death in 2009. He married Danuta who joined him in Ireland and in 1974 they set up A & D Wejchert & Partners which went on to become Wejchert Architects. The firm has been responsible for countless buildings here and abroad including the heritage centre at Glasnevin Cemetery, the award-winning visitor centre at Aillwee Caves, the church at Knock pilgrimage site, early phases of the Blanchardstown Shopping Centre and many of the campus buildings at Dublin City University (DCU), University College Cork (UCC) and Waterford Institute of Technology. They have won multiple awards throughout their architectural careers. Andrzej’s sister Alexandra also trained as an architect and came to Ireland in 1965 where she went on to become a successful sculptor. Andrzej and Danuta’s daughter went on to become a successful architect while their son achieved success in the related field of engineering. An illustrated book of the firm’s work with photographs and architectural drawings, was published in 2008. 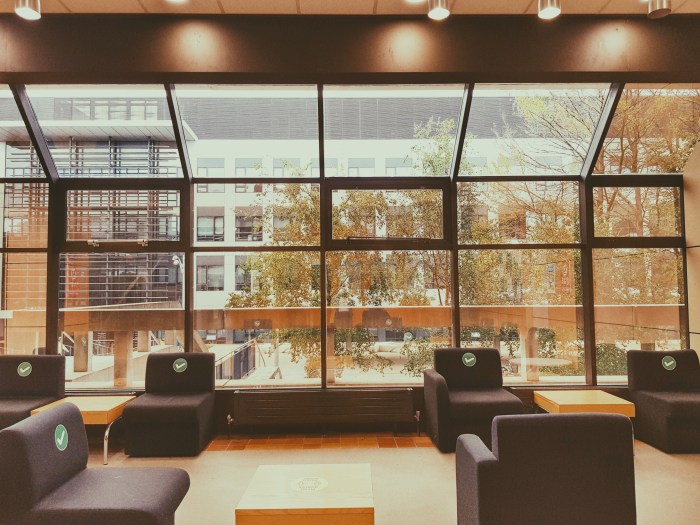 I photographed these buildings during a global pandemic when most university education was taking place remotely and digitally. The lack of students on campus allowed space for the buildings to breathe and be admired. It did limit my access to the building interiors though, and although many have been thoroughly modernised, some materials such as afromosia timber, steel balustrades and concrete stringers with open risers can still be seen while the internal courtyards and cantilevered staircases give a sense of continuity between the buildings’ exteriors and interiors.

UCD can be reached easily from the city centre on public transport and its campus is generally open to the public.

Come Here to Me, Hidden History of UCD 1 – The move to Belfield and the ‘Gentle Revolution – https://ucdhiddenhistory.wordpress.com/2009/04/27/1-the-move-to-belfield-and-the-gentle-revolution/ 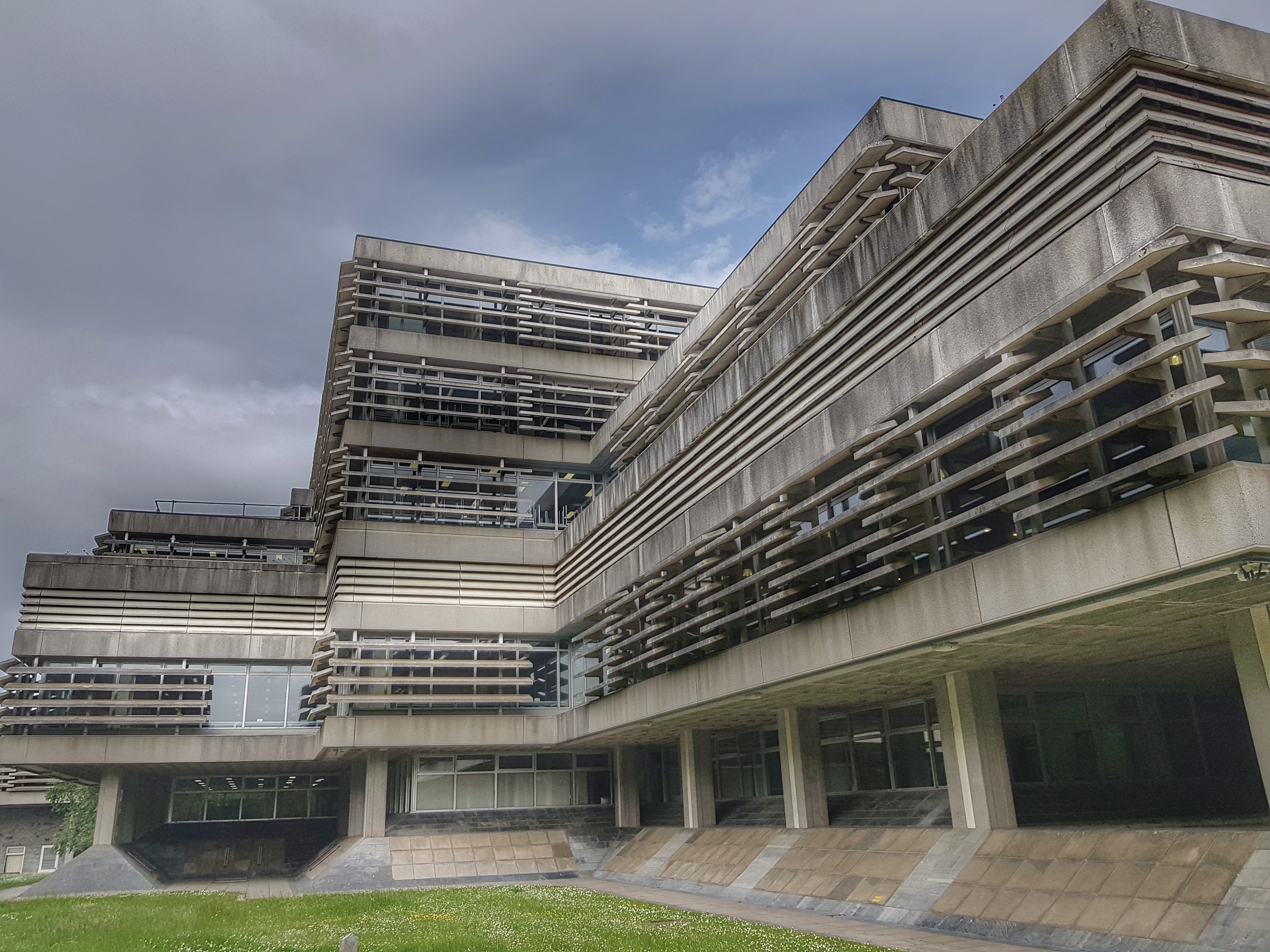 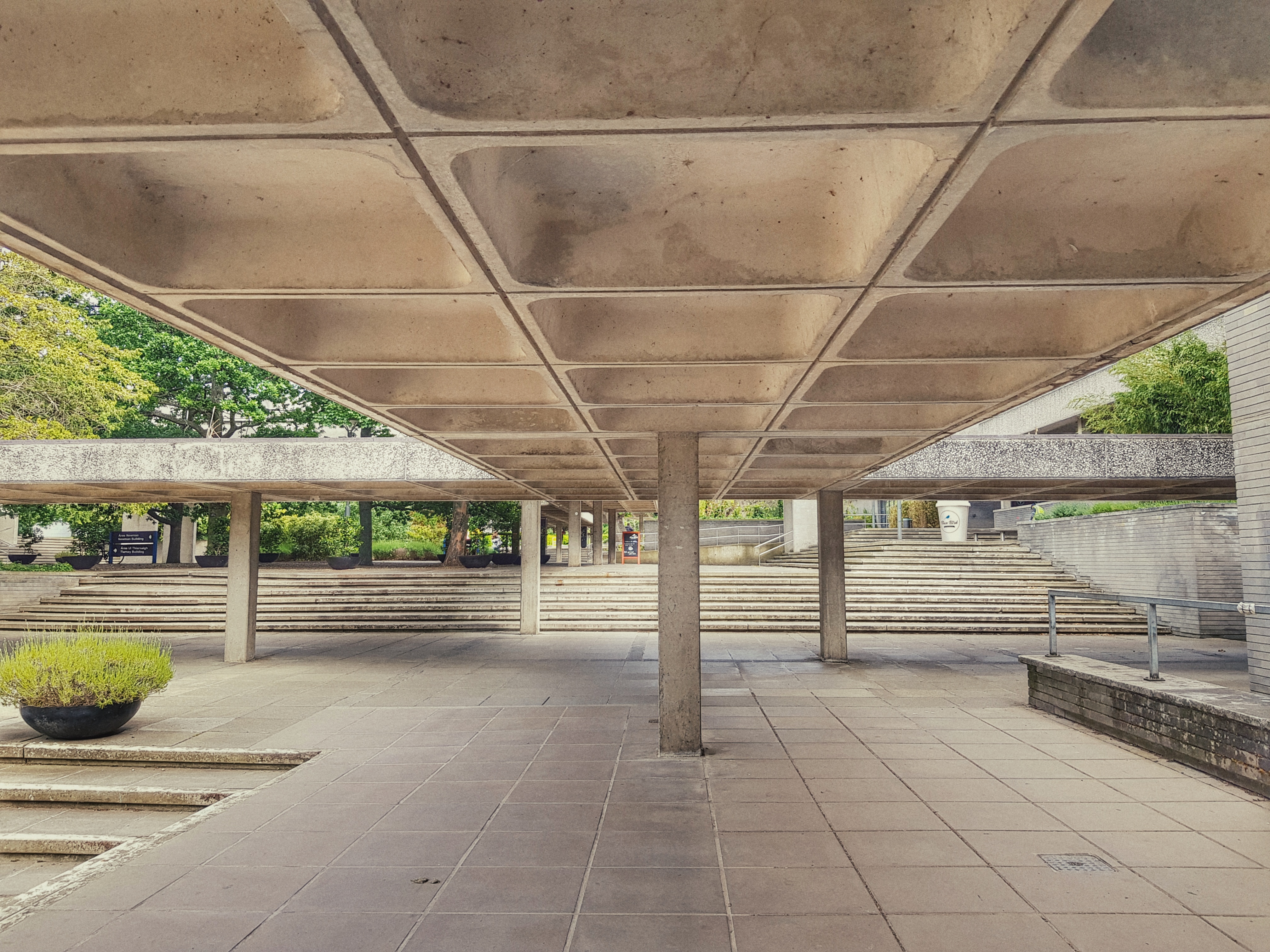 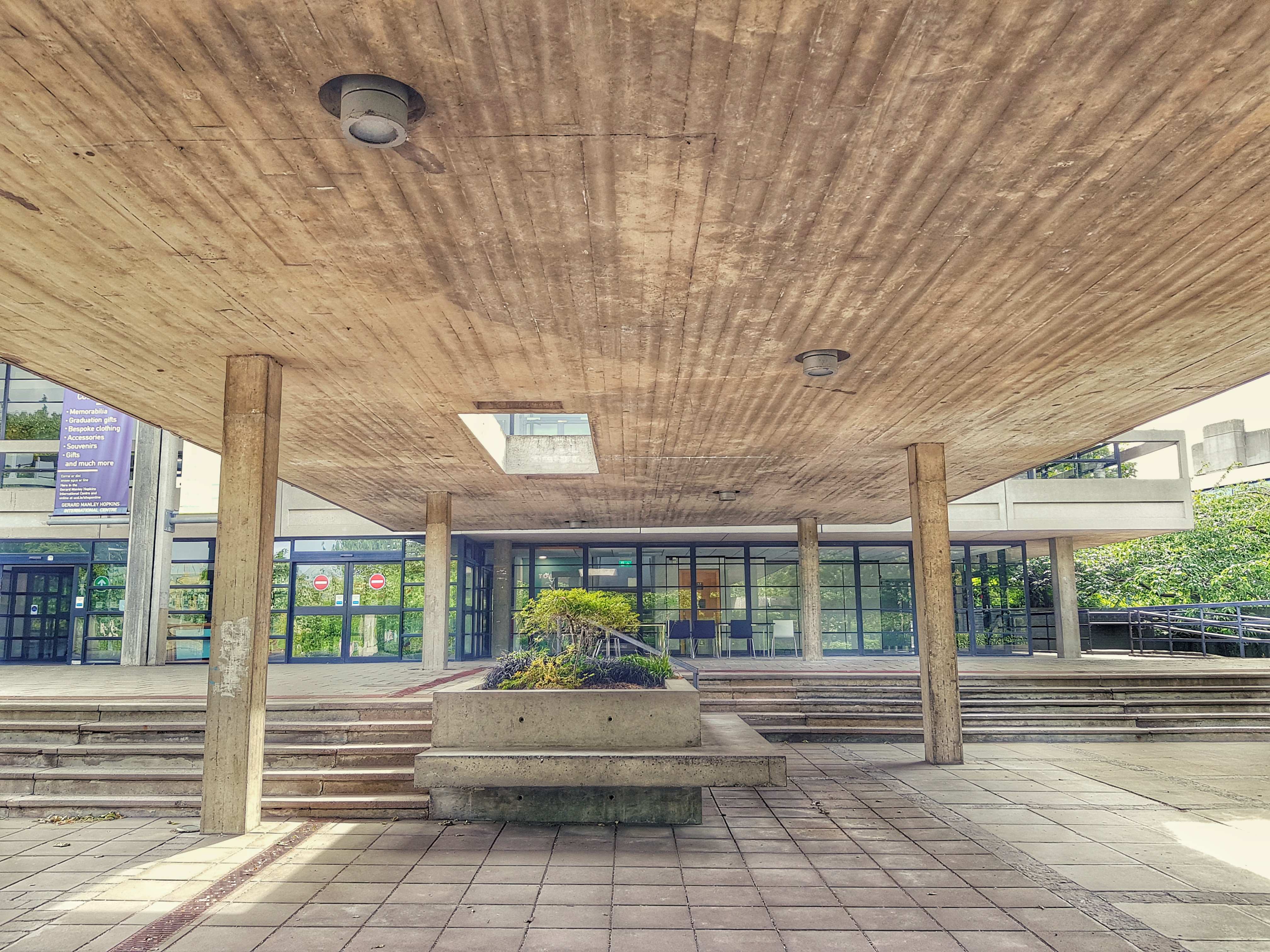 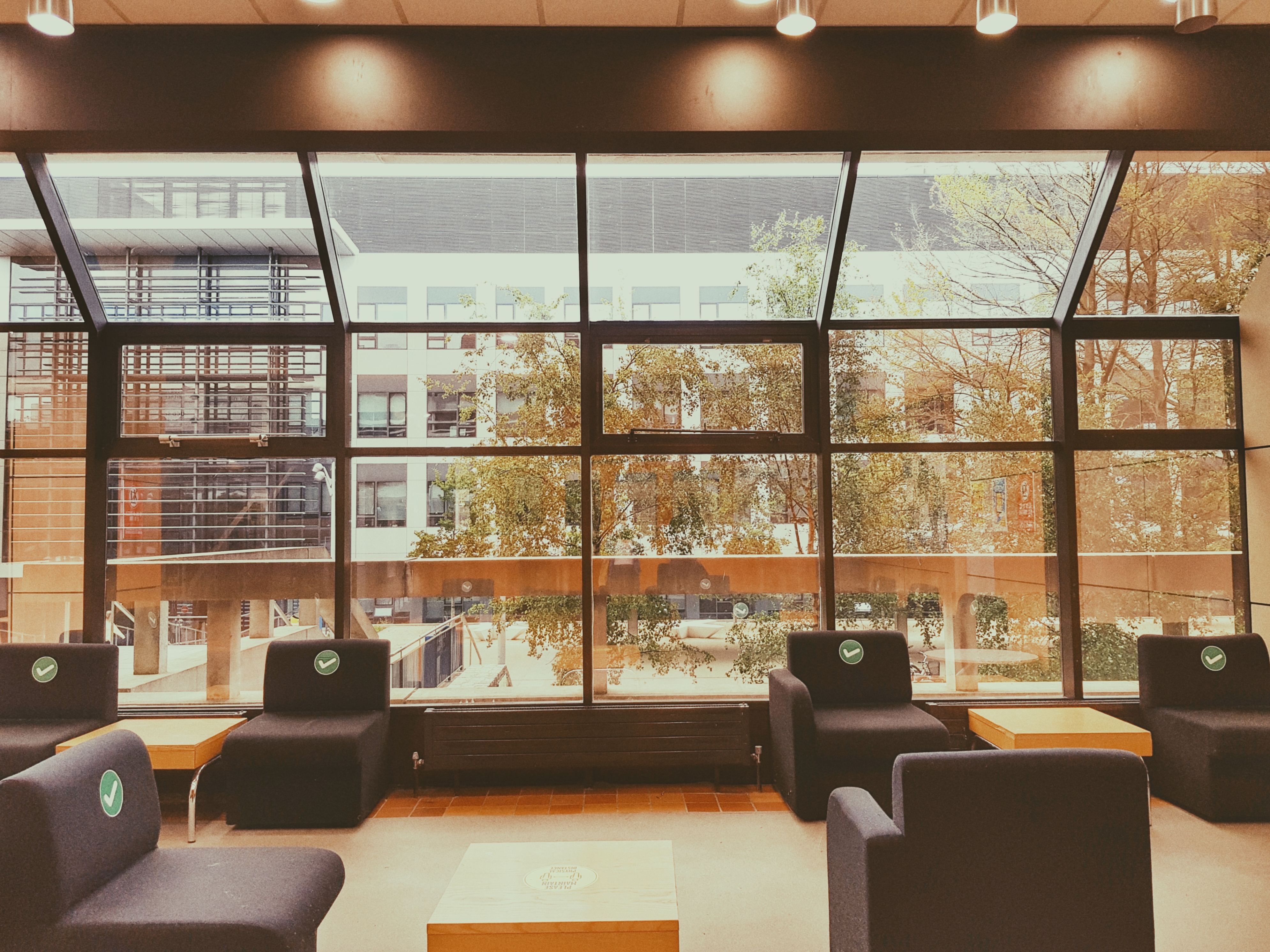